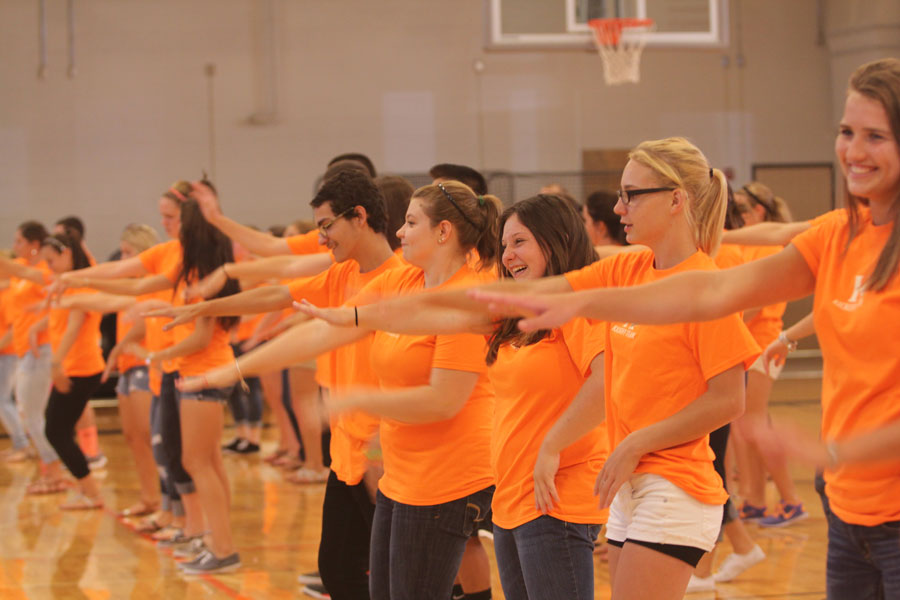 Back in Black and Orange

Students return to Biddeford High School with both anticipation and hesitation.

High school can be a drastic change, new beginning, or stressful time that students endure, but there is nothing quite like the first day of freshman year to get a feel for how high school runs.

Becoming a freshman is a big step. Whether it’s the bigger school, harder classes, or upperclassmen that seem intimidating, freshman automatically face new challenges. For some incoming freshman, it seems high school is nothing more than a few slight changes, and just another day of school.

Freshman Paige Boudreau quickly explained that although high school seemed intimidating at first, it’s nothing like what she expected it to be.

“High school is different than middle school because I thought it would be a lot harder to get around and find your classes,” said Boudreau. “Even the schedule I was worried about but over all I found it to be pretty easy so far.”

Along with Boudreau, freshman Tyler Hall felt slightly nervous and uneasy on his first day. He mentioned that it was all because of his mentors that he began to feel comfortable.

“I think having a mentor made the transition a lot easier,” said Hall. “This school is bigger than the middle school and they [the mentors] helped me focus less on that with the activities we did.”

Hall also mentioned that he is looking forward to the rest of high school, and expects a great first year.

“This year will be fun, since I have never really experienced anything like this before,” Hall said.

And the experience continues into sophomore year.

Sophomore year is not just another year as some may say, it is another year full of memories and Tiger Pride. Although there’s the constant routine of waking up at 6am, or even earlier with bedhead, and dreading the idea of living through a year of the same cycle, there’s a certain charm behind it. No longer getting the “freshman” card played on you, you can finally walk through the halls with a sort of “swagger.”

“I feel like I am more comfortable with the school now,” said Calea Roy, laughing. “…I’m not as nervous.”

As they find their footing in the high school, the stress is something that becomes a part of their daily lives as their classes get harder.

“I feel like there is a lot more pressure,” said Jacob Roy. “You’ll be expected to do more [compared to freshman year].”

“[I deal with it] by managing stress just like anyone else would,” J. Roy said.

Even so, sophomore year is one that shouldn’t be disregarded.

“I’m just looking forward to the oncoming year and seeing what the school year has to offer me….hopefully fun adventures await me around every corner,” C. Roy said.

Sophomore year stands as the calm before the storm, that storm being junior year, as Jija Young now knows.

“I kinda have anxiety sometimes, thinking about junior year,” she said.

Young, after her first day as a junior, already knows the feeling that every junior seems to share: stress.

Junior year is free of the nervousness of a freshman, yet lacking the carefree attitude of a sophomore and the exuberance of senior year. What junior year offers is tests, tests, and to break it up, quizzes.

Rattling off a list of things that are different this year, Young named “…higher classes…and the SATs…and chem” as the largest sources of stress, ending her list with a sigh that will no doubt be well-seasoned before the year is over.

While the sheer amount of knowledge packed into junior year is daunting, Alex Millett sees all of it as an opportunity.

“I hope to definitely learn a lot, especially taking Mrs. Pendergrass’s class and both pre-calculus and statistics,” Millett said.

And while he is “a little bit stressed” about the SAT’s, overall, he’s excited to be labeled as an upperclassman, because it’s “a little better than being a sophomore.”

And what’s even better than being a junior? Being a senior.

The first day of senior year: the very first time you’re willing to get there early, but also the first time you’re not sad that high school is starting up again, or that the very short summer has passed. Instead, you’re sad that your final year is almost over.

For senior Mariah Brady, and many of her fellow classmates, this first day, although the most anticipated of all first days, was also among the most difficult to endure. As the majority of the class marched on the sidewalk with matching shirts and pride, walking effortlessly through the front doors, they didn’t realize until they reached the lobby what really had happened.

“It was our last first time walking through the doors, so it was kind of sad,” said Brady. “The parade was very surreal.”

The parade, unique to Biddeford High School, is something that transfer senior Tia DeSimone has never experienced before. As a great way to kick off the school year together as a class, DeSimone says that she finally felt like a Tiger.

“We never had a senior parade at Bonny Eagle or Old Orchard Beach High School,” said DeSimone. “It wasn’t as exciting.”

That day, as senior Evan Loignon described, started much differently than most.

“I woke up at 5:30 in the morning to watch the sunrise, and I rode my moped in with an American flag stuck to the back,” said Loignon. “It was pretty intense.”

Once the class arrived at the school, there was a new sense of superiority that senior Jordan Stickles puts into words.

“Everyone was looking up at us…we were the cool kids in the school,” said Stickles. “I felt more important.”

Accompanying this feeling of importance is the feeling of nostalgia, something that both Brady and Loignon simultaneously acknowledge.

“It was the beginning of the end.”

The Roar intends for this area to be used to foster healthy, thought-provoking discussion. Comments are expected to adhere to our standards and to be respectful and constructive. As such, we do not permit the use of profanity, foul language, personal attacks, or the use of language that might be interpreted as libelous. Comments are reviewed and must be approved by a moderator to ensure that they meet these standards. The Roar does not allow anonymous comments, and The Roar requires a valid email address. The email address will not be displayed but will be used to confirm your comments.

If you want a picture to show with your comment, go get a gravatar.