After the accident: A former student’s road to recovery

Biddeford High School graduate Alex Paul's recovery after a car accident that left him a quadriplegic. 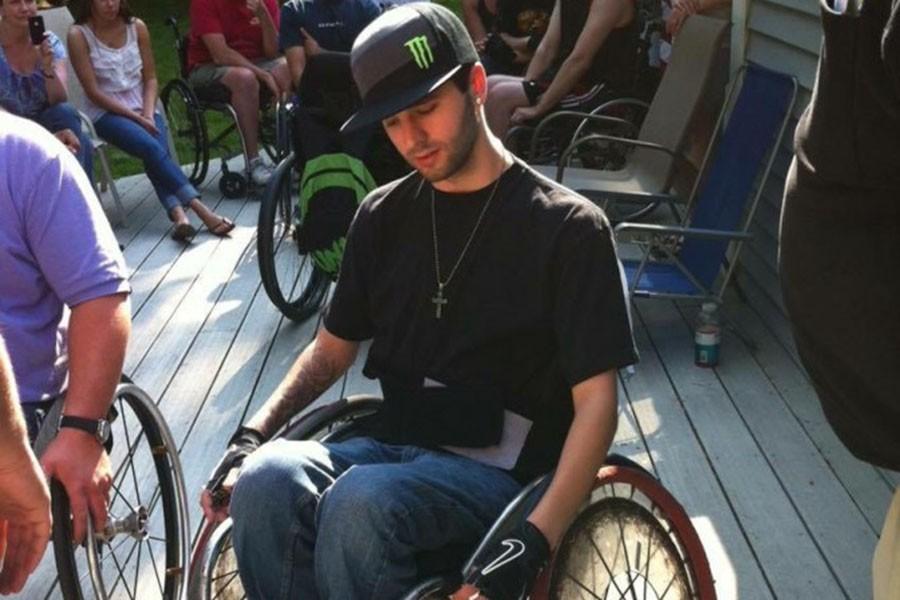 “The fact that something like this would happen to any of us never crossed our minds. At the risk of sounding dramatic, some things you just can’t forget.”

Biddeford High School class of 2008 graduate Alex Paul’s life changed forever after a tragic car accident left him a quadriplegic, or paralysis to his torso. On November 15, 2011, Paul and friends spent the night at the Industrial Park in Saco riding dirt bikes, something Paul and his friends frequently enjoyed, when a car coming in his direction swerved into his lane, hitting and severely injuring him 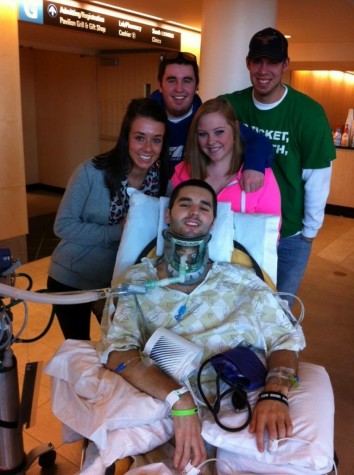 “One night, me and a buddy of mine arrived first, and I got on my dirt bike and took off down the road,” said Paul. “There was a line of cars actually coming out to meet us out there. I was in the regular traveling lane of traffic, and they were coming in the opposite direction, and the rear most car decided to cross over the center line and just kind of fool around in his car. That’s where I was.”

Paul estimates that he collided at about an 80 mph impact. After the head-on collision, Paul flipped over the hood and around the side of the car. He was then thrown 40 feet off into the side of the road. Long-time friend and BHS graduate JP Perreault witnessed the accident first-hand.

“I ran towards the accident and all you could hear was his bike revving on the ground,” said Perreault. “We couldn’t even find him at first. Plastic everywhere, a shoe lying on the ground. When we got to him he was belly down, and I just remember praying to see his back rise to tell me he was breathing.”

After an ambulance arrived, Perreault rode with Paul to the hospital. Paul recalls his first memory as waking up for the first time after the accident, horrified, to doctors surrounding him as he lay on the operating table – mid surgery.

“I slipped out of anesthesia, woke up, and that’s my first memory,” said Paul. “I woke up on an  operating table with doctors surrounding me and above me. I think, in my head, I remember saying, ‘Why are you doing this?’, because I didn’t know what was going on or where I was. In my mind, I was just getting murdered on a table somewhere. I do know that one of them looked at me and I was out again.”

Paul immediately went into operation to repair his legs, as well as another surgery following the next morning for his spine. Long time girlfriend and now fiancé Marina Morin, graduate of BHS, class of 2011, arrived shortly after receiving an unexpected phone call.

Post-accident, Paul spent a month at Maine Medical Center in the Intensive Care Unit [ICU], and from there was transferred to the Boston Medical Center. There, he stayed for three months as in-patient doing physical and occupational therapy in order to prepare him to return home.

“Treatment down there [Boston Medical Center] is kind of a combination of trying to regain function of what you don’t have and teaching you how to live your life with what you do have,” said Paul. “Physical therapy is more of the aggressive type to try and build muscle, try to get function back, whereas in occupational therapy, it was more of trying to teach me to use what I have to get through daily tasks.”

While in the hospital, Paul faced numerous challenges including bed sores, pressure ulcers, and, most significantly, difficulty maintaining blood pressure.

“A huge thing with spinal cord injury is blood pressure,” said Paul. “Just getting through a day was very, very challenging. Laying in a bed was fine, but I obviously didn’t want to just lay in bed all day, so I’d get up into a chair and as soon as I got up my blood pressure would tank down to extremely low blood pressure.”

Paul’s everyday routine during those three months consisted of waking up at 6:30 in the morning, starting therapy, and not ending until 7 or 8 at night. Paul says that spending three months at a hospital sounds like a lot, but is not much time at all for all that they have to teach.

“It was excellent,” said Paul. “They had a huge crew of all kinds of therapists, there was always somebody there as needed, and they always kept me busy.”

“I saw him as soon as I was allowed to and spent everyday after work just sitting with him,” said Perreault. “He couldn’t talk with all of the tubes in him, so we just hung out. [I remember] sneaking him water when the nurse wasn’t looking.”

With Morin studying nursing full-time at Saint Joseph’s in Standish, she followed a tight schedule to make sure to spend the weekends with Paul while he was in Boston, as well as her only day off.

“Someone was there every single day for him, whether it was me, his mom, or his dad,” Morin said.

Paul mentions that out of the four months he spent between hospitals, there came only one day someone wasn’t there to keep him company. Along with family and friends, Paul received overwhelming support from the Biddeford community, including two benefit races as well as an anonymous renovation done to Paul’s parents house after returning home in order to accommodate his needs. This included a roll-in shower and ramp.

“It’s incredible to me how people just step up and help like that,” said Paul. “That was awesome for the community to just kind of come together without even being asked, just as support. That was just unbelievable, and words can’t describe how awesome that was.”

Once returning home, Paul started his recovery process. Currently, Paul attends physical therapy at the Saco Sports Performing Center twice a week, Project Walk in New Hampshire once a week, and Journey Forward in Massachusetts once a week.

“Right now, I go to Saco Sports Performance Center and I do basically physical therapy over there,” said Paul. “They’re more of strengthening. They don’t have any experience with spinal cord injuries or anything like that, but they’re just amazing with adapting to what I do have and they’re just kind of finding ways to get some exercises in and some strength building.”

Each program is specified for different recovery aspects. Project Walk is trained specifically for spinal cord injuries. There, Paul focuses on regeneration therapy.

At Journey Forward, Paul works with a walking apparatus, which puts his body through a walking motion while being held up by a harness over a treadmill, with additional help from machine operated leg braces.

“What that does is it helps to retrain your body,” said Paul. “It helps to get the signals going again throughout your nervous systems. It’s helping to remind your body that this is what walking is. This is what is supposed to be happening, and it makes the recovery process faster, easier, and it’s more successful than they’ve had with other types of therapies.”

After two and a half years, Paul began working once again at Neil’s Motors in Biddeford, a place he used to work at as a technician. Paul now works behind the scenes scheduling appointments, ordering parts, and taking estimates.

“It’s all of the paperwork side of the same industry that I loved so much to get into, and I’m still in, just in a different way,” Paul said.

“I’ve always driven trucks, and I knew that I wanted a truck, so I said, ‘I’m going to get a truck!’” said Paul. “And I did. It’s just a regular pickup truck that’s adapted for me to drive. Just because my situation changed doesn’t mean I have to change personally. I just have to do things differently.”

When first coming home from the hospital, Paul struggled with learning how to function doing everyday things, such as picking up the telephone or typing on a keyboard. Now, five years after the accident, Paul has adapted to this lifestyle, but still struggles.

Morin agrees that every day is a challenge, but recognizes the significant progress Paul made throughout the years.

“I mean, he came home with all of his ace wraps in a binder, in a power wheelchair, and we fast-forward to now, and he’s in his own wheelchair. He pushes his own wheelchair. He’s back to work. He can drive himself,” said Morin. “It’s two totally different people. With a lot of work – it’s not easy. It’s a struggle every single day. We don’t let any of it stop us. We still do everything. We still go on vacation, we go everywhere. There’s nothing that we don’t do.”

“I certainly have always been determined to accomplish what I want, but now I am more focused on life goals and personal success rather than just having fun.”

When he’s not working or doing physical therapy, Paul spends his time researching spinal cord injuries in order to help other people with the same condition.

“The more I know about what’s going on with me, the more I can kind of help other people,” said Paul. “Me being in the situation makes me want to learn more. Living it, you learn a lot faster. I like to know as much as I can about my own situation.”

After everything that’s happened, Paul takes from it a message of positivity to always look forward and focus on what’s next. Paul spreads this message to his friends, family, and community.

“He has never ceased to keep a positive attitude,” said Perreault. “He never has and never will quit. It inspires me to this day to see how strong he remains.”

Paul continues to fight through his challenges and grow from his accomplishments each and every day.

“Everything, absolutely everything is a learning curve, and I come to something new every day, and I just have to learn how to get around it,” said Paul. “It’s made me a little bit more patient, it’s made Marina a lot more patient, and you really learn to not take anything for granted. It’s changed my outlook on life in a great way.”