A day at the fair

Students as well as community members from Biddeford, Dayton, Old Orchard Beach and Westbrook gathered at the University of New England to visit the brain fair, hosted by the neuroscience department at UNE. 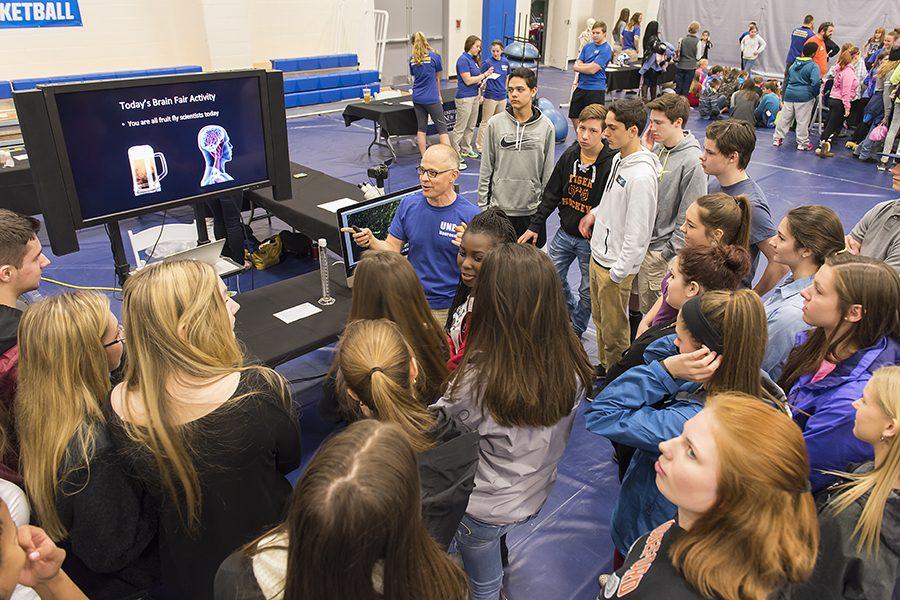 The University of New England’s Brain Fair brought students and community members together in an effort to learn more about our most powerful tool – the brain.

Two weeks ago on Friday, April 8th, students and community members from Biddeford, Dayton, Old Orchard Beach, and Westbrook visited the University of New England in Biddeford for the third annual Brain Fair. The fair showed different exhibits to demonstrate the different functions of the brain, effects of drugs on the brain, and how important it is to protect them. Ed Bilsky, a professor at the college of osteopathics and medicine and vice president of the for Research and Scholarship at UNE, helped organize the event.

“We’re trying to promote brain safety, brain awareness, how amazing our brains are, and why they need to be protected,” said Bilsky. “I think the brain fair went awesome. It was a long day, but it was a really good day.”

One of the largest exhibits, a human brain cave, showcased 25 human brains – some including spinal cords. Different brains were displayed, such as some with brain cancers, strokes, and alzheimer’s disease.

“I think the human brain exhibit is the most impactful,” said Bilsky. “We don’t know who these people are, but every one of them had a story. All of their memories and their experiences are all in that four or five pounds of tissue that we call a brain. It’s kind of humbling.”

“I thought the brain fair was very interesting,” said Bermeo. “The brains were kind of gross, but it was cool. I learned what the brains look like when there’s certain things happening to them. I’d go again.”

Sophomore Sarrah Marcotte joined her biology class at the fair and enjoyed the hands-on experience that came with every activity.

“It was amazing,” said Marcotte. “There were so many people that would give me really good explanations of everything that was going on. There was so much information, and they [the staff] were so helpful. I learned a bunch. ”

Marcotte spent most of the time speaking with a future pediatrician about the brains and trying out every exhibit with friends.

“[My favorite exhibit was] dissecting the cow’s eye; that was really cool,” said Marcotte. “They gave you all these tools and you just dissected a cow’s eye; it was really hands-on.”

Bilsky believes that this brain fair is most important for younger kids interested in science.

“This is a hook for keeping kids interested in science,” said Bilsky. “When I go to talk to the third and fourth graders, even the kindergarteners, they are just fascinated by everything. Then, all of the sudden in the middle school years, science becomes hard. It’s perceived to be ‘I’m not good enough to go into science.’’’

Bilsky encourages students of all ages to explore the different scientific fields.

Olympic gold medalist Dick Fosbury also attended the event in hopes of educating the community of the importance of the brain in sports. In 1968, Fosbury reinvented the high jump that biomechanically provided a better advantage than the older technique. This new technique is called the “Fosbury Flop.” His technique is now used by high jumpers everywhere.

Another exhibit, “Bugs, Drugs, and Brains,” used flatworms to show how drugs and alcohol affect the nervous system. After giving nicotine and alcohol to the worms, visitors were able to see how they reacted. Bilsky decided to pursue neuroscience and pharmacology after discovering the effects of drugs and alcohol on the brain.

“I took a class on alcohol and drug abuse and I was fascinated on how small amounts of these chemicals can totally change your perception of the world around you,” said Bilsky. “That got me into the bain sciences and the pharmacology. I started to do research on alcoholism and opioids.”

“I liked doing the activities with the kids,” said J. Bilsky. “We made beaded neurones and pipe cleaner neurones.”

As for students at UNE, their journey doesn’t stop here. For the near 100 students that volunteered at the event, they plan on continuing to bring these activities and exhibits to other schools around Maine.

“Some of our students are volunteering throughout the school year and into the summer to do these activities on a smaller scale with individual school systems,” said E. Bilsky. “Our next big event is going to be the math festival that we do with the RSU 21 school district, where they do math activities in the morning, and they do marine and neuroscience in the afternoon.”

Bilsky plans on putting on another fair next year due to the success of this year’s fair.

“This is by far the biggest one that we’ve done of the three, and we showed that we could pull it off,” said E. Bilsky. “I’m very confident that we can learn from the few things that went wrong and that we’re going to put it on again next year. It’s a great community builder.”