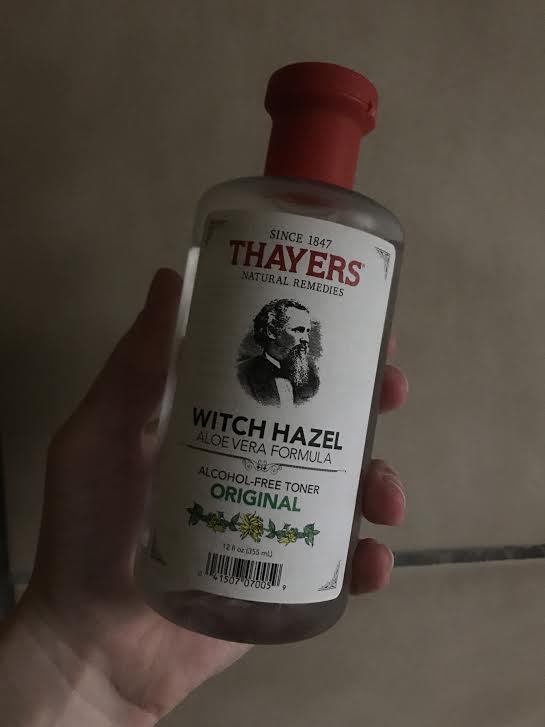 I’ve always hated the color red. At a younger age, red symbolized everything negative in the world. It represented the blood from the scrapes I would get on my knees from the park, anger, evil, and now my skin. My skin gets very irritated very quickly. The blemishes fire up like Donald Trump every time somebody calls him out on something he’s wrong about (everything). A toner is something that equals out the redness on skin. If someone’s skin is off balance — try a toner! Some of the toners I’ve tried include home-made ones — however, they’ve done nothing except make my skin smell like expired milk.

About a month ago, I decided to take a bold move in my life. I purchased “Thayers Original Witch Hazel” for $6 from my local grocery store. I fell in love with this product. This is mostly because it doesn’t smell like something I found in the back of my makeup drawer, and I can’t tell if it’s a foundation or an eyeshadow.

I applied the witch hazel twice a day – once when I got ready in the morning, and once before I went to bed. The results of the witch hazel seemed to be decent — nothing too exciting. However, I believe this to be a miraculous discovery because the majority of these types of products I’ve tried push the oil around on my skin and nothing else. This product seemed to take some of the oil away — which I appreciate more than the world probably appreciates me. Which is a lot.

The product comes in a clear plastic container. It comes out of a small opening at the top and I typically pour the product onto a cotton pad. Which, I have to say, is probably the most annoying thing about this product. I’d prefer it if the product contained some sort of applier with it. I guess I could spray the product directly on my face, but I don’t think that would work out very well in the end.
I recommend this product to the people that aren’t as lazy as I am. I may be lazy, but I’m still better. I contain the right to be lazy when someone like William Shakespeare would describe me as someone he couldn’t even fathom to write about because I’m so perfect. Shakespeare never said that, but I’m sure if he met me, he probably would. Frankly, the world ought to know the beautiful creation that I am. This product is something I think worked fairly well for me — however, it isn’t as much of an artistic expression that Leonardo da Vinci would label me as. My skin is obviously still red and vibrant like a neon “I don’t like you very much” sign at a Donald Trump rally. However, this product helped it go from a bright red tomato to a dull crayon. Even though my personality is not a dull crayon. I’m better than a dull crayon. I’m definitely better than Donald Trump.