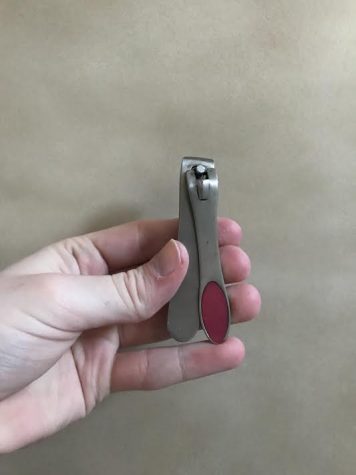 Clipping away my problems has never been so easy.  The change that comes with a new set of nicely trimmed nails makes solving the world’s problems so much easier. Granted, I can’t snatch as many wigs as I can with a longer nail. However, I make the world a better place one short nail at a time.

For the month of February, I’ve decided to turn to a simple yet life changing product to review. Something everyone has, yet no one puts on their must-have list. This product is a $3 no-name-brand nail clipper. This nail clipper is something that I have had for a bit of time now, and I don’t know where I would be without it.

In the past, a lot of nail clippers I’ve had made my nails feel a little odd afterword. I couldn’t describe the feeling with words from the Merriam Webster dictionary. Just know that the feeling of some nail clippers doesn’t feel very fresh or clean.

I typically wash my hands before using this product. I never simply “go for it” because I don’t really know what I would be going for. I could not achieve a nice slim nail if all I’m doing is rushing to trim them. Rushing causes sloppiness. Sloppiness causes bad nail days. I, for one, am not okay with a bad nail day. I will stand against that, just like I stand against people saying I’m not better than them. I am. Face it.

After a nice hand washing, simply clip the nail. Not too close to the finger, but enough to make a statement. I typically wait a couple weeks in between a nail clipping. To be honest, I actually have no idea how long I wait between nail clippings because I don’t keep track of things I don’t care enough about. That doesn’t really matter, just clip them when they need it.

I clip my nails to stay gorgeous, to stay beautiful, and to stay as amazing as I always am. I once read in an older novel (Guiness Book of World Records) about the woman with the longest nails. They were really long. She may have been a nice person, but you don’t want those nails. They were not cute and I do not recommend them.
If I were to recommend anything, it would be these nail clippers. They’re cheap, they’re easy, and they’re at any of the local grocery stores anywhere in the world (I’m assuming). Clip away your problems, just like I clip away the gross people in the world. Also, I would like to point out this is the first column in a while I haven’t made a comment about Donald Trump. I’m getting better, not bitter. I advise Trump to take that same advice.