Senior Megan Friel won two free prom tickets as a result of having the most outstanding promposal sent into the prom planning committee. 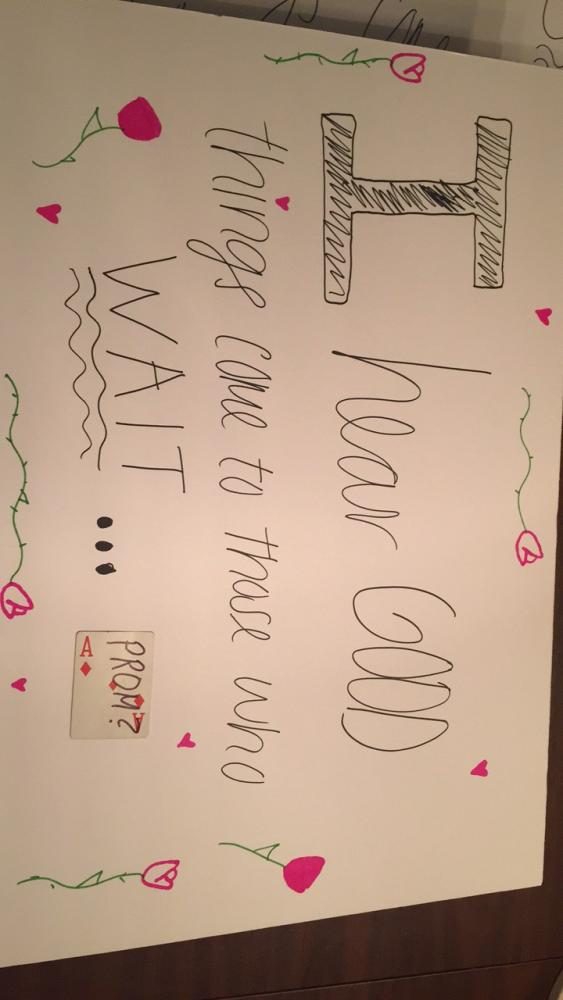 Prom preparation can prove to be very strenuous and expensive, however, before the gauntlet of appointments, fittings, orders and phone calls, there must first be a promposal.

Every year, two free prom tickets are given to a student who sends in the best promposal to the prom planners. This year, senior Megan Friel has been chosen as the recipient of the free prom tickets for her promposal. Friel’s promposal not only got her a prom date, but upheld a promise.

“So my sophomore year, my friend [Kenneth Reyes] asked me to his prom but I couldn’t go,” said Friel. “So when I told him I couldn’t go to his prom, I promised him that he could come to my senior prom, and we’ll have our time at prom then. I just really love Kenneth and I really was excited to go with him, but I couldn’t.”

As Friel entered senior year, she already knew who she wanted to take to prom. Friel kept true to the promise she made to her friend, and one day Friel rekindled the idea of taking Reyes to her senior prom.

“We talk fairly often, so I texted him in October and was like ‘So are you still ready for prom?’,” said Friel. “It was sort of like a joke when I brought it up, but I intentionally meant to ask him if we were still going to prom. Ever since then, we just kind of went with the idea.”

When the time came around for Friel to start thinking about how she would ask Reyes to prom, she thought back to how he initially asked her.

“We would play cards a lot together, so when he asked me, he asked me on a playing card,” said Friel. “He did sort of a trick and pulled out a card that said prom on it. I kept that card hung up in my room.”

After thinking for some time, Friel began to sprout an idea of how she could ask Reyes. However, the obstacle of Reyes attending school in Arizona meant Friel would have to ask him over Skype.

“I wrote on a poster board ‘I hear good things come to those who wait…’ and I taped the playing card that said prom on it that he gave me two years ago,” said Friel. “I decorated it a little bit with flowers. Then I Skyped him, and when he answered I was awkwardly standing there with the poster board and I asked him to prom.”

Upon completion of the promposal, Friel sent her promposal to the prom planners. She elaborated on the story and meaning of the playing card.

“I sent it into the email that they put on the poster for the class of 2018,” said Friel. “I basically sent in the picture and wrote a little backstory along with it showing them what I did.”

Friel sent in her promposal with a “why not” mindset. Much to her surprise, she ended up hearing her name called as the winner of the promposal contest over the intercom at school.

“Yeah I really didn’t think mine was going to win. I thought it was awful honestly,” said Friel. “My friends were talking to me all about theirs and how they went all out. I just submitted it for giggles and I ended up winning, I was really shocked. I did not think I was going to win.”

For Ms.Schang and the rest of the prom planning committee, selecting a winner was not a quick and easy decision. The pool of entries proved to be quite competitive.

“It took us about a day to select the winner,” said Schang. “We put out all the ones that were in contention to win and then everybody put who they wanted. Some people took a little longer to decide because there were a couple very good promposals.”

Twelve total promposals were sent in for the contest. The promposal selection committee whittled the field down to two final contestants. Junior Chanelle Chretien, a member of the selection committee, found Friel’s promposal to not only be very sweet and faithful, but outstanding from the rest of the competition.

“We chose Megan because she kept a long promise to Kenneth that she would take him,” said Chretien. “She also kept the card he asked her with and used it again. It was very sweet of her to keep a promise and not break it for someone else. The story behind it was so nice, and it’s part of what helped us decide between the two final options.”