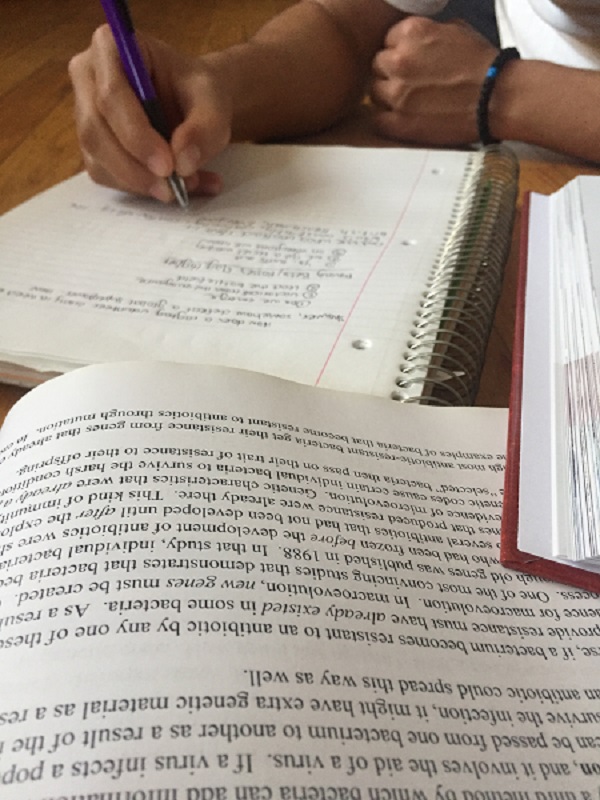 “It’s just a test,” they said. “It’ll be easy,” they said. Yes, the test that colleges want to see; the one past high school students warn underclassmen about. The test that almost gives you more stress than the outcome of the election. But that’s all it is: a test—the SAT, to be exact.

The dreaded SAT has two sections that are comprised of three tests: Reading, Math, Language and Writing, plus an optional essay. Luckily for students, there’s a prep course for this five hour, brain-crushing session of filling in bubbles on a piece of paper. According to junior Devin Cheetham-Wilmot, the course even takes you inside the head of the test-maker in order to achieve the goal of passing.

However, some students, like junior Lauren McCallum, weren’t fully informed on what the course had to offer.

Despite not taking the prep course, McCallum mentioned that her AP Lang class helped with the English section of the SAT.

“We did a lot of stuff where we do practice multiple choice questions,” said McCallum. “A lot of those were harder than the SAT questions because it’s AP; I think that was an advantage.”

Knowledge aside, walking into the classroom to take the test is no easy feat. Cheetham-Wilmot described the room as packed, yet silent.

“[There were] people wanting to just get this [SAT] done and over with,” said Cheetham-Wilmot. “It felt scary because SAT is a very large test, I was stressing about it the entire time—wanting to get a good score for colleges and such.”

So, does the prep course help overcome the inevitable fear of failure? Junior Aaron Dutremble explained that the course mainly hits points that you wouldn’t learn in a classroom, such as time management. In his experience, it was to make sure they had everything they needed to get things done efficiently.

“It definitely [helped] with figuring out strategy,” said Dutremble. “Like how to control which [questions] you do and which ones you save for last.”

On the day of her test—not having attended the original test day, but the make up day—McCallum decided that in the end game, she couldn’t change anything about her score.

“I just wanted a nap,” said McCallum. “I think we finished [the test] with enough time. There was like half an hour left of school, so, I just walked out. [But] I definitely want to take it again. I could do better.”

In order to prepare for the test, studying on your own plays a large role. Just like a sport, practice is essential. Cheetham-Wilmot urges students to ask teachers about the SAT. Especially in the math and language departments—where those subjects are the main focus of the test.

“I was pleased with a score of 1160,” said Cheetham-Wilmot. “I know I studied in my free-time. I’d go online and see if I could find the past test questions, or what people were saying about the test to try figuring out how it works.”

English instructor for the prep course, Megan Pelletier, explained that she conducts her lessons in a case-basis fashion.

“I get to know the kids the first day; we take the first practice test, see where the areas of weakness are, then I try to gear my lessons toward that,” said Pelletier. “I answer any of the questions that they have questions on, then we talk about ways we can work to make it [taking the test] less hectic.”

Having older siblings, McCallum explained that the SAT was a huge build up for her ever since they were high school students. Because of that, McCallum recommends taking the prep course or at least studying on your own.

“I was really nervous that I was going to do really bad and get [a score of] two,” McCallum said.

Even though nerves were apparent, McCallum remarked that people were wearing sweatpants, sweatshirts and seemed rather tired on testing day.

“They really looked dead inside because they were about to sit there for five hours,” McCallum said.

Although it’s an activity that primarily consists of filling in those empty bubbles, the SAT is something that most students must face eventually. Individuals who have yet to take the test can look forward to those five hours and know that the real preparation is up to themselves. After all, that’s what it is—just a test.