The Creations in The COT Parking Lot

A look into the construction that students drive by every day--but often fail to notice. 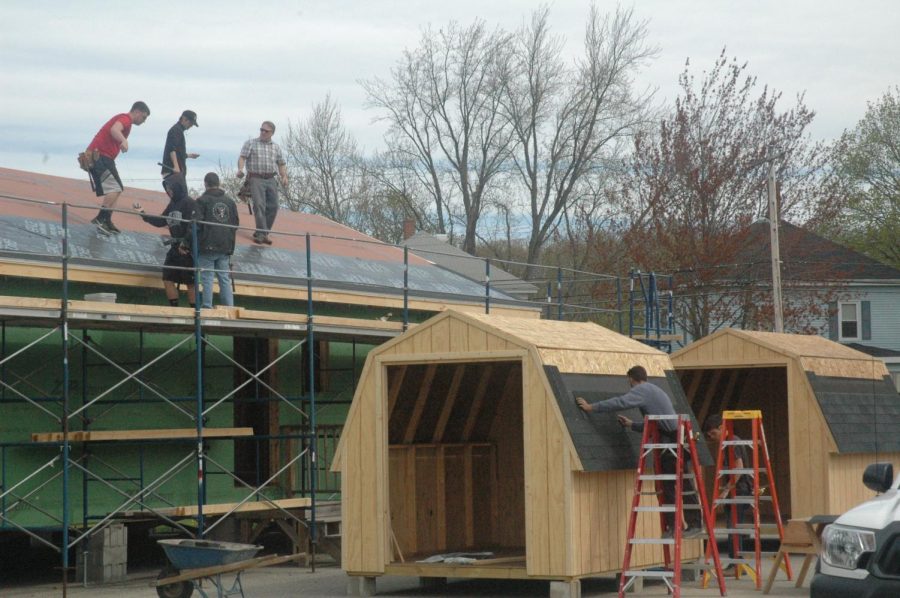 Students walk across a roof–a roof that they built. The sun glares through the plastic safety glasses on their noses; sweat beads their foreheads. For weeks now, they’ve been drilling and hammering the woodwork of a house that will soon become a dispatcher’s headquarters. The hard work is worth it, though, because they love what they do.

Each year, building contractors bring the Biddeford COT (Center of Technology) a project to work on, and in turn, multiple trade classes get involved and construct a piece of architecture. It starts out with a design, and makes its way down the line. Within five months, senior Daniel Frechette completed the design for the building now sitting in the COT parking lot.

“The Saco school department needed a new transportation building [for the bus dispatchers],” said Frechette. “So they came to the COT since [we] always build modular designs–which is what I designed.”

Frechette explained that while the design process is do-able, the needs of the buyer make it difficult.

“You do one thing and then the buyer’s like ‘oh I want this’ and ‘oh I want that.’ So you have to constantly change it.”

He did most of the design on a COT computer using AutoCAD, a design and drafting software, and Revit, a building information modeling software. The design was his own handiwork.

“Well, except for the AutoCAD drawings which have been there for quite a while, but the floor plan, everything inside it–that’s me.” 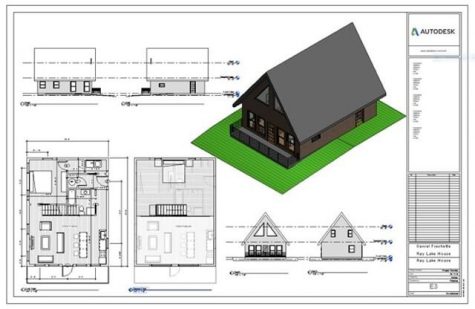 In order for the COT to take on a project, it must meet two criteria: one – does the customer support residential construction? And two – is the organization a non-profit? If those criteria are met then they consider it, according to the project facilitator and COT carpentry instructor Wayne Hapgood.

“[At that point], it’s just a question of whether or not we can slip it into the academic calendar for any given year,” said Hapgood. “Every time we get into something as complicated as a house, for instance, it takes time.”

The program of taking on projects has been in place for over 40 years. It’s a Biddeford Saco Rotary initiative, so the COT partners with the Rotarian community as it is a strong supporter of the CTE (Career in Technical Education) program. The Rotarians provide the funding for the building and the educational opportunity for students to build it.

“At the end of the process, they sell the home [for a] modest profit, and any proceeds that they make on the project goes back into the community through scholarships and the good works that the Rotary does,” Hapgood said. 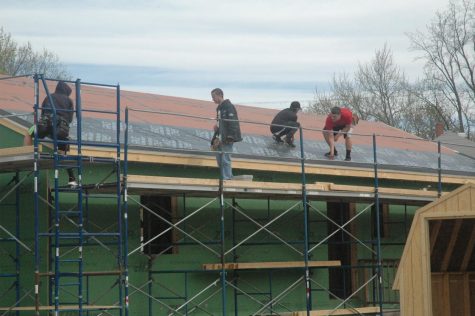 “My class, we did framing for the building,” said Hilton. “We did the sheeting on it, and we’re right now roofing it. It’s pretty fun because you get to learn how to put things together, you feel accomplished when it’s all up.”

They started building this year, and it didn’t take a long time to learn. Even though Hilton won’t be pursuing the trade as a career, he explained that it’s a good skill to have.

“My grandfather, he has built two houses–well, three, for his family, all by himself. So I figured I’d see how it is. I enjoy doing it; it’s pretty fun.”

Many trades, including welding, machine trades, plumbing and electrical classes have been consistently involved in a variety of projects in the past. They range from handicapped ramps for a group home, to a gazebo for a veteran’s park, to dugouts for an athletic association. There were a lot of lessons to be learned from those projects.

“It beats the heck out of most standard academic classes where you’re doing that lecture thing,” said Hapgood. “You’re very active. You’re out[side]. There’s the downside of working in the winter, but that’s just the reality of being in Maine. Everybody kind of deals with it.”

COT Electrical instructor Bill Gervais explained that for their portion of the dispatch building, it’s a matter of drilling holes, pulling cable and mounting boxes. 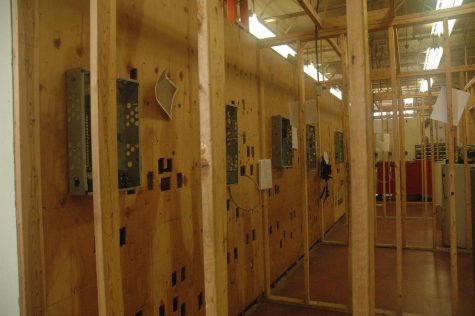 “All our students practice the techniques necessary to wire [it],” said Gervais. “So, part of our training is everything they do in that particular building–we actually practice in the class.”

Because the dispatch building is going to Saco, it will be inspected twice. Once by the city of Biddeford, and once by the Saco electrical inspector. There is little to no room for error.

“Once it’s inspected, [it] gives us the authority to go ahead and insulate it and install the drywall,” Gervais said.

He mentioned that the project is only a positive thing. In the class, they practice wiring and tear it down afterwards. But when they wire the dispatch building, it will remain intact.

“Saco students will be driving by it daily,” said Gervais. “So they [the electrics students] take a lot of pride in knowing that this is something that they actually did–and [that] people are going to be using it.”

It’s not an easy task to build a building. According to Hapgood, even though it’s hard, “everything worth doing is hard.” The kids who are involved in the project are involved voluntarily. They’re not in it for the credit, as it’s not a requirement for graduation. They’re in it to learn it.

“If you’re fortunate, you’ll probably own a home and you can build a deck, you can build a garage, you can remodel a basement,” said Hapgood. “All of those things that to most people are absolutely daunting–they have to go and hire somebody to do it–you have a skill set and you can do it yourself. It’s a skill that no one can ever take away from you.”