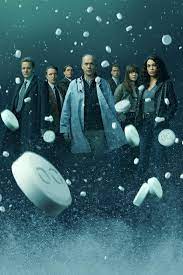 Dopesick is a limited series on hulu or disney plus depending on where you live with only 8 episodes. It depicts the birth and early days of the opioid epidemic from multiple points of view. This is both a strength and a weakness of the show. The show is at its best when it’s showing how powerful and horrible this drug and the corporation behind it are. But it is also its weakness because from the outset it’s immediately juggling an excessive amount of storylines and characters. It might’ve helped the show if it had fewer characters. But given that it’s based on reality and the fact that each character’s story has something important to say, making the problems it comes with ultimately worth it for the message it sends. Though another disadvantage that the series has is that as well as characters and storylines it is also juggling different years, skipping around from all the years in the early 2000s, the 90s, even the 60s. There are so many of the time skips that it is genuinely impossible to keep track of within the same episode let alone 8 hours later if you watch them back to back. If you don’t watch it that way there is even less hope of keeping track of it.

Despite all of the flaws the show has, the writing and the story that the show is there to display beats everything going against it. To aid the show, it’s star studded cast is giving career best work in this show, making it an absolute masterclass in drama, storytelling, and real life evil.